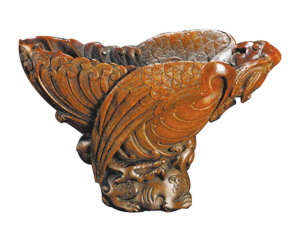 In recent auctions, the number of rhino horn owls appeared more often. An auction, or a few pieces, or dozens of pieces, can achieve good results. This spring, Hong Kong Christie's held a special sale of "Song Bamboo Hall Collection - Important Rhinoceros Sculpture (2)" Rhinoceros Carving. 30 auctions were sold. Among them, the sale price of two rhino horns has reached 39.86 million Hong Kong dollars, setting a new record for rhinoceros auctions. The auction rate of the 15 rhinoceros carving art products launched by Beijing Ancient Sky â€œRight and Consciousâ€ Rhinoceros also reached 100%. According to industry sources, the price of rhinoceros has doubled in recent years, but there is still a lot of room for growth.

In the domestic auction market in recent years, there are always some bright spots. Among the Chinese handicrafts, the rhino horn carving is undoubtedly the record-breaking "seed player." In the spring auction, more than 30 pieces of rhinoceros sculptures launched by Beijing Poly were traded in full; more than half of the auctioned items cost more than one million, and the "King Kangxi Rhinoceros Hero Cup" was sold for 7.16 million yuan. More than a dozen pieces of rhino horn carvings from Ming and Qing Dynasties launched by Beijing Hanhai are also traded. Beijing Yongle featured 4 pieces of rhino horn sculptures without first-rate shooting. The first domestic auction company in Beijing, which specializes in the sale of rhino horn carvings, also performed well. In the special auction of â€œRice and Heartâ€ rhinoceros auction, the sales rate of the 15 rhinoceros carving art products reached 100%, and the total turnover was 62.664 million. Yuan has set a record for the largest scale, highest transaction rate, and highest total transaction volume in the mainland.

Dai Yong, manager of Beijing Yongle Porcelain Miscellaneous Department, attributed the hot status of domestic rhino horn carvings to the high price and 100% turnover of this year's Christie's Spring Rhinoceros Sculpture. At the end of May this year, Hong Kong Christie's Spring Auction held a special sale of "Song Bamboo Hall Collection - Important Rhinoceros Sculpture (2)" Rhinoceros Carving. All 30 auctions were sold, setting a record turnover of 240 million Hong Kong dollars, including two auctions reaching 3986. Millions of Hong Kong dollars, the highest record of the auction of rhinoceros carvings. The same is the Hong Kong Christie's, two years ago, the results have not been underestimated, the introduction of the famous rhinoceros eagle collector Huo Manduo's collection, as the world's first "Song Zhu Tang Collection - important rhino horn carving (1)" auction, a total of 31 lottery items were sold for 17 pieces with a total turnover of 42.66 million yuan.

According to industry sources, rhinoceros horn carvings have increased greatly in recent years. The number of tens of thousands of yuan in rhino horn carvings is already in the past, and the price of over one million has become the norm. However, compared to the sharp rise of jade in recent years, the rhino horn owl has risen reasonably, it is a regular increase, and the pace is very stable.

Medicinal value for its color

Rhino horn carving has existed for a long time, but it did not become an art until the middle of the Ming Dynasty. The carving process of the rhino horns of the Ming Dynasty gradually entered a period of prosperity. In the mid-Qing Dynasty, it reached the peak of history. From the Ming Dynasty to the late Qing Dynasty, the tiny rhinoceros cups were simple and complex, and they experienced an evolution from simple to luxurious. In the late Qing Dynasty, the national power was declining, and the imported rhinoceros was reduced, and many of them were used as medicinal materials, so the art of rhino horn carvings declined. Among the many rhino horn carvings, more than half of the rhinoceros cups originate from royal preference for its medicinal value. "Functional indications for rhinoceros" in the "Cerbuterium Collection" are defined as "detoxification," and there are therapeutic effects of heat-clearing, cooling, convulsions, and detoxification. Therefore, the rhinoceros carved finished products are mostly cups, so that drinking can not only sober up, but also can be mixed in the liquor's medicinal properties, can be described as a rare wine.

The rhinoceros is rare in the world

Christie's Hong Kong has twice launched the "Song Bamboo Hall Collection - An Important Rhino Engraving" special session. As the master of the Pine Bamboo Hall, Mr. Hu Manchu has studied the world's Asian rhinoceros: There are only a few museums in the world that have a certain size of rhino horns. There are more than 100 rhino horn sculptures in the National Museum of Ireland; more than 60 Harvard University Museums; and a certain number of the Chicago Art Institute and the Chicago Museum of Natural History; and the San Francisco Asian Art Museum; there are about 120 Beijing Palace Museums; the Shanghai Museum There are dozens; Nanjing Museum has 4; Shenyang Museum has 2 and most other museums in the Mainland are not; Taipei's â€œForbidden Cityâ€ has only 4 carved rhino horns, and there are also some museums in the UK... ... He gave the conclusion that there are less than 4,000 rhino horn carvings in the world, and there are very few exquisite craftsmen, and most of them are hidden in famous museums and famous collectors around the world.

â€œThere is still room for growth in the value of rhino horn carvings. Now the rhino horn carvings on the shooting ground are not the best, and naturally they are not the most expensive. Overseas collectors still have some excellent rhinoceros eagles in their hands, but they still donâ€™t want to use them. The auction will wait until the market for rhinoceros eagles stabilizes again. Perhaps these collections will appear," said Hong Qi, the international director of Chinese art in Sotheby's Hong Kong.

The rhino lived on the land of China long ago. In the Neolithic cultural sites in Hemudu, Yuyao, Zhejiang Province dating back 7000 years, five individual rhino bones were unearthed. There is also a record of rhinos in the literature. In the prehistoric era, China had a large number of rhinoceros that survived, including the giant rhinoceros population that had survived in Xinjiang and the Tibetan Plateau. According to the record of Oracle inscriptions, during the period of the Shang Dynasty, which was three or four thousand years ago, the rhinoceros was the object of hunting by the Yin people. During the Warring States Period, rhinoceros existed in North China. For example, the rhinos were the subject of the wrong gold, silver, bronze rhino. The Chu country in the south is also known for its large number of rhinoceros. More information shows that at the time the army of the Chu state used rhinoceros as armor. From the Tang Dynasty to the Ming Dynasty, tribute rhinoceros records were recorded in Guangxi, Hunan, Hubei, Sichuan, and Guizhou. However, with the increase of human activities and the change of the environment, the number of Chinese rhinos has gradually decreased. According to the data, China's last rhinoceros was hunted in 1922 and was a Chinese single-horned rhinoceros (Java rhinoceros).